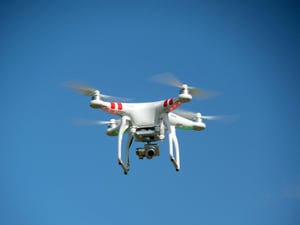 Currently, the payload and flight time capacity is modest for the small, quadracopter-style (micro) drones available. Then again, it wasn’t many years ago that email first came to our smartphones! It’s a safe bet we aren’t too far away from relatively inexpensive (<$2,000) drones that have both significant flight time and payload capacity.

While commercial use of drones is still restricted by the Federal Aviation Administration (FAA), exemptions are becoming easier to obtain, albeit with certain strings attached. In other countries, drones have seen commercial use for a number of years already.It’s anticipated the FAA will issue their final rules on commercial drone use in the next 1 to 2 years, opening the floodgates for public and private entities to easily take advantage of drone technology. Those that are prepared to act quickly will reap the rewards.

With their low cost of entry and unique capabilities, drones will quickly move out of the ‘early adopters’ phase and into mainstream use. Our in-house testing of drones for capturing land surveying data and visual inspection imagery already shows enough promise to augment or outright replace certain activities currently handled by land-based crews.

Time will tell, but the tea leaves in my cup indicate drones are here to stay. For the right applications, aerial capture of information isn’t just an incremental increase in productivity and safety, but rather several orders of magnitude better. Additionally, depending on the systems used to capture the data, the end product often has a richer data set for follow on users.

More testing needs to be done to ascertain exactly which applications are best suited for drones, as well as maturation of the cameras and sensors available to capture the data. But don’t be surprised in a year or two if the sky above you occasionally buzzes with the hum of a micro-drone. It’s nothing to fear, though, especially if some of those drones are working on your behalf.

Stay tuned to our blog for updates on specific drone applications within our industry and major FAA drone regulation milestones.

Do drones make you excited or nervous? Leave a comment below and let me know your thoughts.