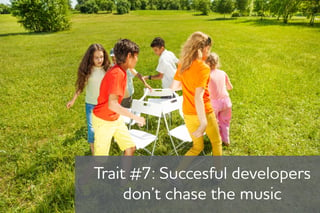 Timing the land development market is much riskier. I like to compare it with a game of musical chairs, only in this game the music plays for years at a time and can also be silent for years. These cycles can be so long that you can grow accustomed to the tune or the silence, thinking it will never change. In this high stakes game, the chairs are the safe return on investment and the players are developers, builders, realtors, and investors. When the music plays it’s a seller’s market: the louder the music, the stronger the market. When it’s deafening, many people stop keeping track of chairs because they either think the music will never end or the peak is far off.

Perhaps most importantly, the best developers remember that, after the inevitable down cycle, the market will always rise again.

Buy Land When the Market is Down 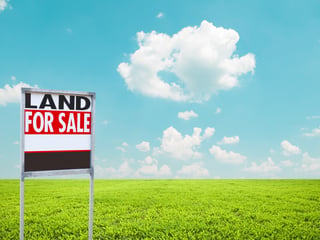 The adage “Save your money for a rainy day” is especially true when buying land. Once the music crescendos, prepare for the downturn. We all witnessed properties for sale during the recession that we knew were being offered well below value. Oh, if we’d only had the cash! Great developers see recessions as the best time to buy and save most of their money for those occasions. Who wouldn’t want less competition from other buyers, lots of over-leveraged desperate sellers, and lots and lots of inventory? Plus, buying low allows you to eventually sell for a set targeted return, which means you don’t have to worry about predicting the peak.

In the last recession, banks were selling a lot of foreclosed real estate at a loss because they were under tremendous pressure to move properties and had no emotional investment or dream invested in the dirt they got stuck with. They just had to move it. Developers who had exercised forethought were ready and reaped the rewards.

For example, a year or so before the crash one of my longtime clients told me the market had gotten too crazy and that a downturn was coming. He wasn’t sure when, but he felt confident it was inevitable. Knowing this, he decided to set himself up to benefit from it. He strategically liquidated some of his assets, established low-interest lines of credit, and stockpiled cash. Then he waited. When the market got near the bottom, he was ready and scooped up land, completed key entitlements, and built out some of it with hungry contractors. And now that the market is hot again, his patience and wisdom have paid off in big returns.

Entitle Land When the Market is Down

Not only are prices lower in a soft market, but it’s also a great time to entitle your properties. Agencies feel the effects of development downturns as well. When the market is booming they take developers for granted and at times play the role of stern regulator. When the market is down long enough, they recruit developers to apply and are much more interested in helping development review applications gain approval. Other benefits of a down market can include gaining increased density approvals, lower impact fees, increased flexibility on variances, and faster approvals.

A Difference in Mindsets 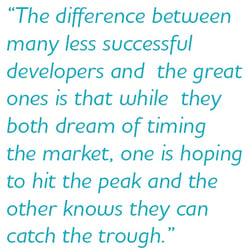 The difference between many less successful developers and the great ones is that while they both dream of timing the market, one is hoping to hit the peak and the other knows they can catch the trough. They dream of timing the opposite ends of the real estate cycle. Great developers comfortably wait for the peak as the telltale sign of the next decline. When they shop, everything is on sale, and they realize returns in multiples of their original investment when the market rebounds. In other words, rather than wait for the music to stop before fighting to grab a chair, they’re willing to sit down early to ensure their spot.

My most successful development clients are not buying land now, they are developing land they bought years ago.

The Great Recession is thankfully in the rearview mirror. We want to believe we will never make those mistakes again, right? But the next recession is coming, even though there is disagreement about when. Right now the music just seems to be getting louder. Every day, freshly minted developers who want to buy buy buy now are calling me. Some are even willing to offer over asking price to make sure they win the acquisition competition. They have fallen in love with the dirt too soon. Then they want to speed up the entitlement and construction phases to finish and sell before the peak! I wish them well, but I fear they’re setting themselves up to be caught without a chair when the music inevitably stops.

I hope you have enjoyed this series so far. There is only one more trait to go. I value your feedback and comments. Please drop me a note or feel free to disagree with me. I might learn something!