The majority of accidents involving cars and bikes happen at intersections. That makes sense, because the intersection is where all users mix. As good transportation engineers, we want to ensure this mixing occurs in a manner that is efficient, safe, and comfortable for the users.

I’ve seen that many agencies are beginning to embrace the separated bike lane design but are unsure about how to continue this through an intersection. They prefer that the bike lanes merge back with the roadway and cross the intersection because that is what they’ve become accustomed to. The problem with that is the benefits of the separated facility are lost where they are needed the most.

Separated bike lanes are great along a corridor, but if you don’t change your intersection design to maintain this separation you really are not providing much benefit. The solution is a Protected Intersection design, also known as the Dutch Intersection because of its use and origination in the Netherlands.

The Protected Intersection works by minimizing conflict points between vehicles and other users and shifting the remaining conflicts to locations that are more visible. Separation is maintained between users via corner refuge islands, and crossings are set back from the intersection by a vehicle length, typically 20 feet, to increase the visibility of users. In addition, signal timing can be modified to give bikes and pedestrians advanced greens to further increase visibility. Vehicles turning right can see bike and pedestrians ahead of them waiting to cross instead of to their side or in their blind spot. 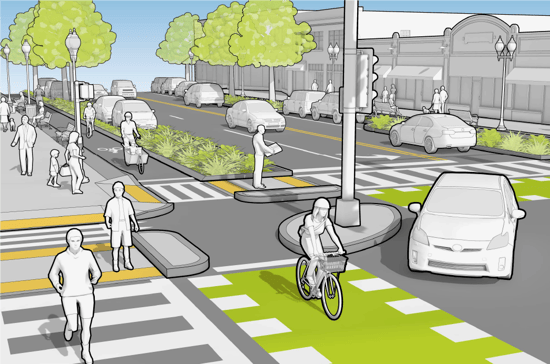 The corner refuge is typically provided by curbing along the midpoint of the intersection radius between the two directions of travel and the intersection. The curbing maintains the separation the users have along the street and can help aid in directing bike traffic in the correct direction of flow. A cyclist turning right will stay separated from the roadway along their entire path.

The set-back crossing enhances visibility by putting stopped bikes and pedestrians within the line of sight of drivers who intend to turn right. This dramatically increases safety for all users. The set-back crossing also gives room for a right turn vehicle to clear the travel lane while waiting for pedestrians or cyclists to cross. These benefits are demonstrated in the following image from the Massachusetts Department of Transportation Separated Bike Lane Planning and Design Guide: 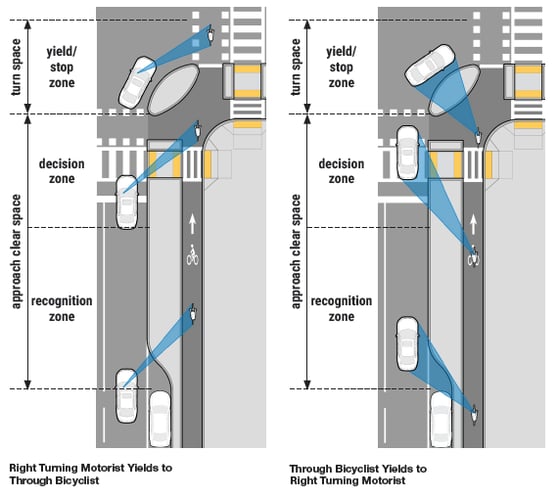 The Protected Intersection design is not limited to just one type of intersection. I am currently the project manager of a 1-mile corridor project using separated bike lanes in Vancouver, Washington. We are implementing eight Dutch Intersections along the corridor that include not just signalized intersections but also stop-controlled and a roundabout.

Coming Soon to an Intersection Near You

Providing separated facilities for cyclists and pedestrians is a relatively new idea (in America, at least) that is still evolving. This creates unique challenges at intersections. Fortunately, Dutch Intersections safely accommodate all the separated users. As more and more communities adopt and implement their own Complete Street Policies, expect to see an increase in the use of separated bike lanes and, as an extension, Protected Intersections. When your agency eventually faces these same design questions, you will already be armed with the answers.

Check out our previous posts in this series:

Separated Bike Lanes: What are the Stormwater Implications?

I’m interested to hear your thoughts on Protected Intersections. Has your agency built one? Have you used one? Leave a comment below and let me know.