Transportation Funding by the Numbers 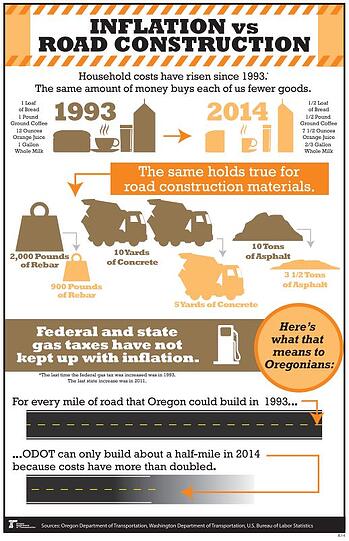 We are all keenly aware that the buying power of our dollar simply isn’t what it used to be.  But how often do we look at the buying power of our tax dollars? I imagine that most of us agonize about how much we individually pay into the tax system, but don’t consider how those tax dollars buy less and less as time goes on. Unfortunately, agencies at every level are dealing with the financial difficulty of less buying power, and many of them are dealing with declining revenues as well. That’s two trends heading in the same, albeit wrong, direction.

Transportation funding is one of those nagging topics subject to the same declining trends of buying power and incoming revenue. Whether we are thinking of state or local transportation funding, or funding at the national level, there are alarming trends that put the future of infrastructure, and the economy, at risk.

Let's take a look at a few numbers to illustrate that point, starting with the buying power of a dollar in 1990, when the federal gas tax closed out the year at 14.1 cents per gallon.  Simply using an online inflation calculator, a dollar in 1990 would be worth $1.82 today, and yet since 1990 we have only seen an increase of 4.3 cents per gallon at the federal level, and no increase since 1993..  The math is straightforward, but seeing it in writing is instructive, at least for me.  That means that for every dollar we spend today on infrastructure, it would have cost 55 cents in 1990, assuming all other factors have stayed the same (material cost, labor cost, etc.).  We know all other factors haven’t stayed the same.

Now I know what you are thinking.  Isn’t that a primitive way to look at transportation funding? You’re right, if that was the only lens through which to view it.  For me, it’s useful to see the trends.  The actual tax rate is less important than the trend itself and, of the two, the trend is the most alarming.  Revenues are simply struggling to keep pace with inflation, let alone growing construction demands due to population increases and growing maintenance needs on the overall system.

So, if the revenues aren’t keeping pace with the funding needs, then it would make sense to increase the revenue or change/amend the current funding mechanism to accommodate the need (which, by the way, is still an “increase” in revenue, I am fully aware).  The problem is, raising taxes is a hard thing to do, and for good reason.  There are those of us that already feel like too much of our hard earned cash goes out the door, and sometimes, we feel the pain of that loss so deeply that it overshadows what we are actually putting out.  Understanding that emotion, even in myself as an infrastructure advocate, pushed me to understand what the average outlay of gas tax for the average American household was, at least at the federal taxing level (understanding that state gas tax is in addition to the federal, and varies by state).

What I found amazed me.  Courtesy of the American Road and Transportation Builders Association, I saw that for a household that averages just under two vehicles (1.75 vehicles per household), achieving an average fuel economy of just over 21 miles per gallon, and driving an average of 11,318 miles a year (2011 data), the federal gas tax paid for that household would be $3.28……. per week. Yes, that is correct, a total of $170.66 for the year.  Most of us pay more for our satellite television, or our cell phone, in just a few months time, and yet struggle with the tax we pay at the pump.  We have access to more than 4 million miles of public roads in this country, and until recently we have paid somewhere around $4.00 per gallon each time we fill up, and yet only $0.184 of that gallon goes to the federal gas tax.  It’s astonishing.

The very roads we use to get to work, and the essential service they provide to our everyday lives, and the access they provide for freight movement and transit mode choices throughout the country, are all provided for such a small investment on the federal level.  I would have never guessed that I paid more for my coffee this morning than my contribution to our federal infrastructure for the week.

So how do we fix the problem of declining revenues?  If there is agreement that the decline in infrastructure is occurring more rapidly than our current ability to maintain it, then the inherent problem becomes how to fund it.  There are many ways being discussed across the country, and like all tax discussions, the topic of transportation funding comes with quite a debate.  Whether it's increasing the gas tax on its own, indexing the gas tax to keep pace with inflation, or even shaking up the paradigm by converting to a mileage based fee, every concept comes with its own sense of controversy.  That controversy, falls in line with every other major issue facing this nation today, health care, education, you name it.  Even with those other priorities, something needs to be done, and soon, or we will put at risk the very infrastructure investments that our parents and grandparents sacrified.

Again, I’m an advocate, but in one persons view the struggle is clear, this is a debate worth having, and having now.  I'd be interested to hear your thoughts on this topic.  Please feel free to reach out to me.