Don’t Get Caught Flat-Footed after Notice to Proceed: Pitfall #1 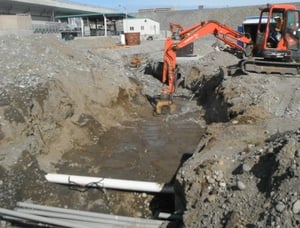 After years of planning, designing, and permitting your project, you’re finally ready to begin construction and issue the Notice to Proceed (NTP). It’s a big moment. Then a week later you’re contacted by your inspector, who tells you the contractor has stopped working and is threatening to submit a Notice of Changed Conditions. You have very little time to get up to speed and decide on a course of action. What will you do?

This is the unfortunate situation many owners and project managers face not long after issuing NTP. If it hasn’t happened to you yet, it probably will someday. The key is to not be caught flat-footed. Even though construction is still far from its peak level, the first two weeks after NTP offer plenty of challenges. This series of posts will explore issues that can plague a project right out of the gate and offer tips for how to deal with them quickly and effectively.

The beginning of the project is often where underground issues, and delays associated with them, are most prevalent. For instance, a contractor recently notified us that their crew was on standby due to an underground pipe not being in the exact location shown on the plans. Does this type of scenario sound familiar to you?

It’s essential for construction project managers to use the time prior to NTP to become familiar with their contract's specific language regarding differing site conditions and site investigation, keeping in mind that not all contracts spread the risk among the parties the same way. When the contractor claims their crews are on standby, familiarity with the contract will allow you to respond quickly.

Time is of the essence, both for the contractor to submit a Notice of Changed Conditions within the contract-specified time frame and for the Owner to provide clarity to the contractor. Clarity is essential for the contractor to complete the remainder of the project efficiently. The simple math for Owners is this - the longer an issue drags out, the more incentive a contractor has to recover costs associated with the delay, regardless of how well the contract supports their case.

Depending on the nature of the work, it is usually best to notify the contractor to keep working. This is why it’s so important to know your contract - most contracts contain language that the contractor must continue working as efficiently as possible. The situation doesn't get better when the contractor threatens and ultimately pulls crews and equipment off the work, especially if it's critical path work. So don't let them do it!

In those situations where the Owner does appear to own some of the risk, the costs of standby crews and equipment are a factor. So you might as well get some production from these crews while figuring out the ultimate solution. Obviously there are some limits to this, especially when there is potential for significant redesign and wasted materials, but in most cases you can “encourage” the contractor to make progress via the contract language.

Situations like these also require robust documentation. Accurate daily reports and lots of pictures from the site inspector are absolutely critical from this point forward, as they will form the backbone of evidence for an equitable adjustment, if one is warranted.

With any luck for the Owner, the issue can be resolved quickly through shrewd application of the contract's differing site conditions and site investigation clauses. If a redesign is required, push the design team hard to get revisions out to the field as quick as possible. This will limit the disruption to the contractor's original sequencing plan for the work.

Remember the simple math I mentioned earlier: the longer an issue drags out, the more incentive a contractor has to recover their costs, regardless of how well the contract supports their case!

Have you faced a delay not long after issuing NTP based on unanticipated site conditions? How did you handle the situation? Please leave a comment and let me know.