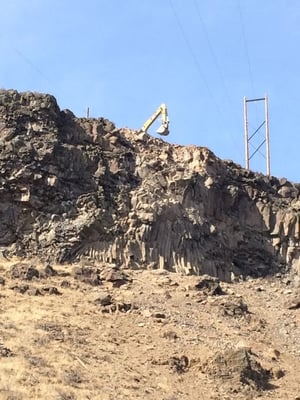 At some point in your life you have probably been out on a hike or in remote spot on top of a hill and noticed a big rock precariously perched on the edge and said to yourself “I wonder if that would move?” It’s like the little kid inside you can’t deny the temptation to shove on that boulder and see what happens.  Well, earlier this week on a project in Central Oregon that same scenario unfolded. Just replace the little kid with an excavator and the big rock with a few enormous boulders.

All this started with the construction of a new tower on the edge of a basalt cliff high above the Deschutes River. During the “rock excavation” portion of the work to make ready for the tower footings, a.k.a. blasting, a portion of the cliff face was disturbed and after some expert geotechnical analysis, the decision was made to eliminate the instability. Cue the “kid on the excavator”. 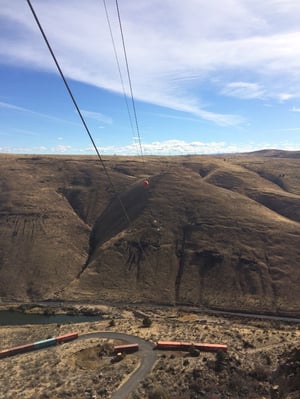 Of course there was significantly more planning that took place prior to “bombs away”. The sacrificial shipping containers were one part of that plan. They were arranged to act as a wall to stop any tumbling boulders from going too far.

Unfortunately for me, I missed the “show” the day before and only got to see the aftermath, but even that was impressive. I crunched a few quick numbers and estimated the boulder in the picture below weighed in somewhere between 50 -60 tons. That’s a big boy! 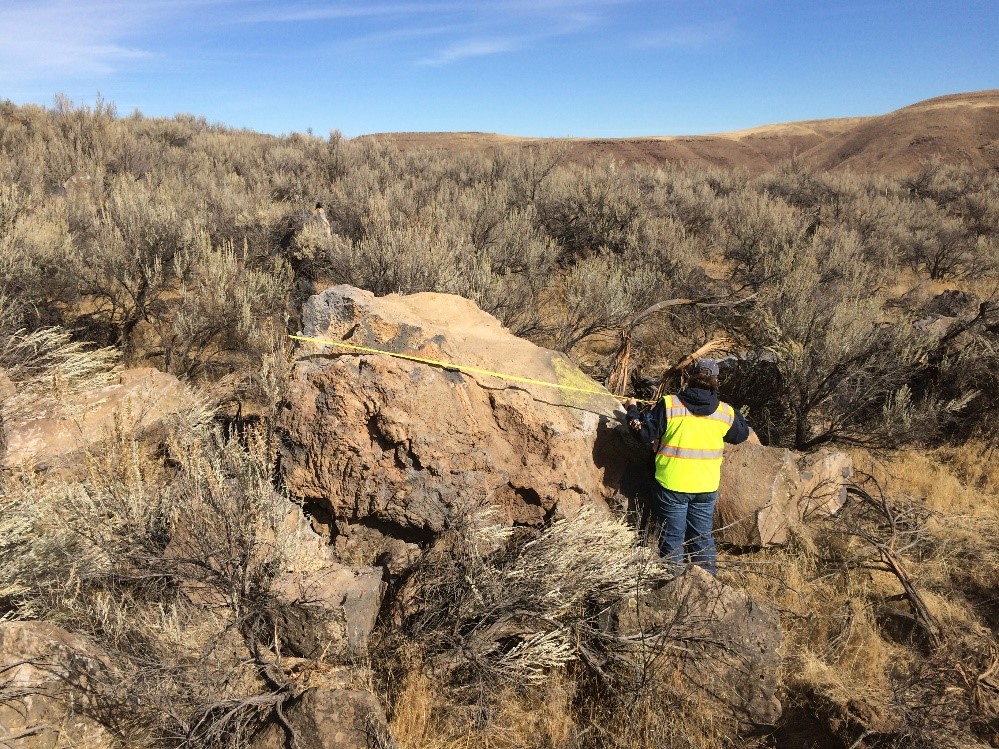 I want to throw a BIG THANK YOU out to Anna Tindall, the MacKay Sposito QAR onsite, for taking time to show me the project and talk about the challenges she has encountered on this one. It was clear to me after talking with her and hearing a few interesting stories that she had several opportunities to employ some Constructive Candor on this job. Nice work Anna!!

Catch up on the happenings at MacKay Sposito!

At MacKay Sposito, we deliver infrastructure solutions and excellence in leadership while advocating for a better tomorrow. We focus on people, building strong and lasting relationships with our co-workers, clients, and communities. Our Civil Engineers, Land Surveyors, Construction Managers and Inspectors, Landscape Architects, and Public Involvement Professionals stand in your corner and demonstrate selfless dedication because we believe in the work you do and the value it provides to our communities.

We serve so our communities thrive.